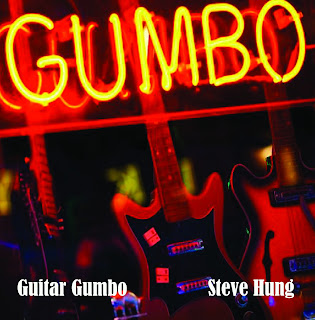 My new album, Guitar Gumbo, is now available! You can order a physical copy of the album at http://www.stevehungmusic.com/Store.html or if you're tech-savy, download a digital copy of my album for 'name your price' http://stevehung.bandcamp.com/

Whereas the music on my debut album Geetar (2008) is all Americana (blues, bluesgrass, folk) and influenced by the folk music I was exposed to while living in Texas, my new album Guitar Gumbo ventures into new musical territory and currently displays my constantly evolving guitar style. On this album, I venture a bit into jazz, and play half the songs on a semi-hollowbody guitar. The guitarwork is diverse, some of the songs have a strong Chet Atkins influence (Back at the Ranch, Little Duster, Carinval), others have a Joe Pass chord-melody jazz influence (New Orleans Blues, Summer Romance), while Irish Fiddler and the bossa nova tune Midnight Serenade are totally new styles. A lot of the songs, though, are still deeply rooted in Americana like slide-guitar song Lowdown Blues or the roadhouse blues tune Stop N Go Blues.

Because of the diversity of guitar styles presented in the album, I decided to title this album Guitar Gumbo since it's a "gumbo" of various guitar styles.

Now I will explain the inspiration behind each song on the album:

1. Irish Fiddler- in 2010, I took a vacation to Portland OR. As the plane descended, I looked out my window to view lush trees and forests everywhere. I felt like I was landing into some lush-green forest in the middle of Ireland. As I was viewing this scenery, this catchy Irish melody-line on fiddle popped into my head, and I kept humming this fiddle-line throughout my whole trip in Portland. When I checked into my hotel later that day, I transcribed the fiddle tune I heard in my head on my guitar. That tune eventually became Irish Fiddler.

2. Midnight Serenade-  I had actually written this song way back in 2000 when I was 17. I decided not to record this song until this album, since I didn't really think it fit on my debut album Geetar (2008). I always love latin music, like flamenco guitar, bossa nova, or even Carlos Santana, and wanted to write a latin-themed song. However, what makes this song really unique is the use of Indian tablas as the percussion instead of latin percussion instruments. I think the tablas add a nice touch to the song. You can view my previous blog entry from 2011 "East Meets West With Success" where I discuss recording tablas for this tune.

3. New Orleans Blues - in 2010, I also took another vacation to New Orleans. Again, while sitting on the plane to New Orleans, I was getting excited about visiting Bourbon St, the French Quarter, eating all the great cajun food, trying beignets and coffee at Cafe du Monde, and listening to all the great jazz and zydeco music. In my excitement, this mellow-jazzy melody line on trumpet popped in my head, I was was humming this line till the plane landed. When I checked into my hotel, the first thing I did was open my guitar case, and transcribed that trumpet melody line on my guitar. That trumpet line eventually became New Orleans Blues.

4. Blues Bop- I wrote this song around 2003 when I was a college student living in Austin. In Austin, the majority of blues players are heavily influenced by Stevie Ray Vaughan, Eric Clapton, and Johnny Winter. Although I love these guitarists, I wanted to carve my own unique blues sound and not just mimic Stevie Ray. I decided to experiment  with mixing jazzy lines into a 12-bar blues format, and and it resulted in this song. You can even hear bits of Freddie King's "Hideaway" at 00:41.

5. Summer Romance- In the last few years, I've been getting into jazz guitar, and learning jazz standards like Autumn Leaves and Blue Bossa. I like jazz standards, how they're light and catchy yet have a classy old-school feel and use colorfull jazz chords like 7ths, 9ths, dominants, and dimished. I've decided to write a song modeled after jazz standards, and this song is what resulted, something light-hearted and catchy that you can snap your fingers to, like a summer romance.

6. Hokey Pokey Jazz- this was another song I wrote back in 2003. I decided to take the first few bars of the melody line of the children's jazz song "Hokey Pokey," the part that goes "you put your left foot in...." into a whole another direction, and this song is what I came up with.

7. Stop N Go Blues- yet another song I wrote back in 2003. This song is influenced by all the roadhouse blues venues like Antones and Joe's Generic Bar that I frequented while living in Austin. However, what makes this song different than a standard 12-bar I-IV-V blues shuffle, is that this song starts in the middle at the IV instead of the I, which makes things interesting.

8. Back at the Ranch- in the last few years, I've really gotten into the music of Chet Atkins. This song is heavily influenced by his guitarwork.

10. Lowdown Blues- this is a Mississippi delta blues influenced slide guitar song that actually should of been on the Geetar (2008) album, but for some reason, I left it off that album because I thought it sounded too generic of a slide blues song. However, I've been getting many requests for this song at my shows, and knew I had to put it on the next album.

11. Busker's Blues- I've told this story many times before during my live shows. When I was living near Washington DC from 2006-2011, in between gigs, when I didn't have another gig lined up soon, I would busk at the Alexandria waterfront, which is a beautiful outdoor walking area infront of the Potomac River with tons of shops and restaurants. This is a popular place for musicians in DC to busk.  However, the City of Alexandria had a rule for busking at the waterfront, which was that all musicians had to perform unplugged. Being an acoustic fingerstylist, I knew my fingerpicking would be drowned out in the volume war against the saxaphone busker, the trashcan stomp busker, and the accordion busker. I knew I had to do something, so I wrote a song specifically for busking on the Alexandria waterfront, which consists of loud heavy strumming, and attention-getting fancy guitar moves like slapping the guitar.